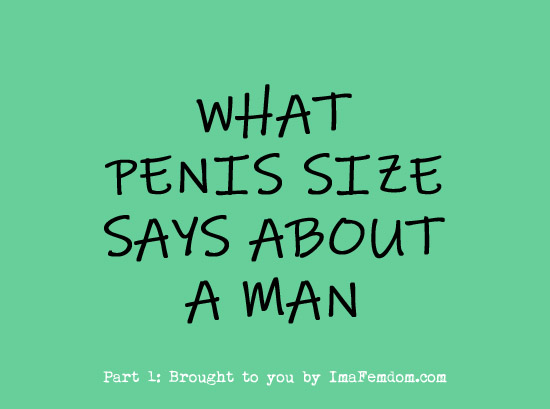 The size of your penis tells far more about a man then the clothes he wears or the job he has. What a guy is packing in his underpants often times will show you exactly why he is the way he is and why he acts the way he does.

Let’s get this one out of the way first. All of the loudmouth, arrogant acting men of the world are without a doubt the smallest penises around. For a man, the size of his penis equates to what he has to prove to the world in a sense.

So the smaller his dick is the more he feels he needs to overcompensate for it. In his mind, everyone knows his penis is small and he is trying to prove that it’s not. Obviously it is but these are guys are often delusional too.

Don’t jump to the whole “guys with trucks” logic because that’s untrue. It is the loudest, rudest, most annoying guys of the world that are packing the tiniest peckers — I’m talking micro penises here people.

Now here is another group of men that are absolutely pathetic. I like to call these the Friend Zone French Fries. These are the guys that always want to and are more than happy being “friends” with a woman. On the surface it seems like, oh yeah that can totally happen — but that’s a lie.

Men and women can not be friends in the way we can when it’s a same sex situation. These guys are tiny thin penis having perverts for the most part. They lurk around with their french fry in their pants, just waiting for a moment to trash talk your boyfriend, give you a speech about being more independent and of course waiting for a moment of sadness to seize upon.

These tiny dick losers can’t wait for a breakup, hell the will even try to cause one, all in hopes that when you’re weak, vulnerable and beating yourself up, that you will finally give in and have sex with them. These are the closet cuckolds of the world, the scumbags of the little penis world.

Total beta-males, in fact they are the definition of it and you’ll never find a boner over just shy of five inches in this crowd. They know they have small cocks but they convince themselves that everyone else in the world does too.

“They can’t be that much bigger!” Is often their line of thinking. They know deep down that penis size matters but they fight the feeling and claim that only size queens feel that way.

The big difference with these guys is that they fully realize they have tiny inferior cocklettes but they accept it. Through this acceptance they instead start fantasizing about being able to have a girlfriend or wife, like a real man, if they simply let them bang whomever they want.

Their logic is that if they let their partner enjoy big dicks then they can maybe get to have pity sex afterwards or at least can tell everyone they aren’t single. These guys don’t stop there though!

Some of them end up wanting to suck and play with big cocks themselves (Hello!) and even submit to licking their partner clean after having sex with another man. Does that sound like a real man to you? We all know the answer.

We hope you have enjoyed Part 1 of our series on penis size. Feel free to leave comments and they will be addressed in part 2 of this fascinating web series.

4 thoughts on “What Penis Size Says About a Man: Part 1”