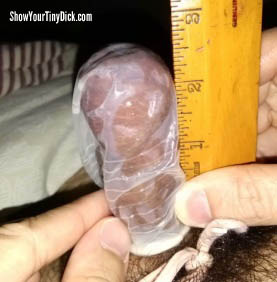 I was 22 when I realized I had a micro penis and I was completely devastated.

As far as looks are concerned I’m pretty hot and so was my then girlfriend at the time. It didn’t take long for her to point out how tiny my penis was; she did the first time she saw it.

I will never forget it, I had just pulled down my jeans and boxers, was excited as can be as I watched her take her panties off. She looked up at me as I was shaking my dick around getting it hard and ready but then she asked, “Need some help getting that hard?”.

The problem was, I was already hard! I asked if she was joking with me but she had no clue what I was referring to, then it happened. She was like, “You mean that’s your boner?”, I was mortified!

Reaction to the Micro Penis Humiliation

Instantly I called told her she was acting like a bitch, being overly defensive and she let me have it. She said that she didn’t know penises could be that small and as a nursing major, she would classify me as a micro penis. I told her that was bullshit and she asked me to grab a ruler from my dorm room desk and said that 5.25 inches is average.

I grabbed it up and she held it next to my dick — not even 3 inches! She smirked and was all like, “I told you so!” All I could do was beg her not to tell everyone, which she didn’t but from that day forward I knew I had a micro penis and knew that penis size matters. It was a tough pill to swallow but what’s the point in trying to deny the truth.