The first time I truly realized I had a small dick was during a relationship with my college girlfriend. This is my small dick confession. 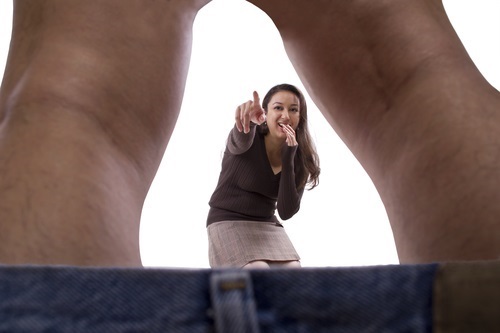 I had never had complaints from my ex but we were both virgins at the time so she probably didn’t realize my small dick dilemma.

Long story short, the first night my college girlfriend saw my small dick we were on the verge of having sex. We had been making out, rubbing each other and enjoying some foreplay but it all changed fast.

She Pulled Out My “Small Dick”

My girlfriend jumped down between my legs and began unzipping my pants. I could feel my dick was rock hard and I was proud for her to see it that way rather than my extremely small looking flaccid penis. So she unzipped me, pulled my pants down a bit and then went down my boxer briefs.

I looked down at her smiling and anxious to feel her mouth on my hard cock but instead she was smirking and looked like she was either gonna get sick or couldn’t hold back the laughter. So I asked what was wrong and when she tried to answer she just busted out laughing hysterically and apologizing over and over while she did.

Once she stopped she said to me point blank, “You have a wicked small dick!”

You would have thought my heart exploded because I just went silent and laid there as she stood up from the bed. I could see my chance slipping so I begged her to suck me off at least or I’d have blue balls but she was like, “Blue balls are a myth asshole and no small dick like that is gonna guilt anyone into anything!”

I was mortified and honestly could feel myself about to cry but she wasn’t done. She went on to say something about not wanting to waste her time on a small dick that could never please her and that I wasn’t the friends with benefits type or the husband type. So I asked what type of guy I was and said, “You’re the guy you put into the friend-zone with the small dick!”, as she laughed some more.

Needless to say she dumped me and later her friends even told me she shared the info with them. So there you have it, that’s my small dick confession about the time I found out I had a small dick that no women want other than to laugh at and humiliate with their friends.

This small dick confession story was submitted to us by a fan that wished to remain anonymous.